About The Shidduch Center of Baltimore

Since its inception, The Shidduch Center of Baltimore has been an organization that has made
sure to adapt and renew along with the needs of the times. Due to the reality of an ever- changing
shidduch landscape and the needs of a growing community, this approach has kept the
Shidduch Center at the forefront of the shidduch world. Our organization has
grown exponentially over the years, and under the guidance of local Rabbanim, The Shidduch
Center of Baltimore has had, Baruch Hashem, great success.

In 2005, a number of concerned community members formed Kol Simcha, a new organization
dedicated to helping those singles of the Baltimore community in shidduchim. In 2008, the
organization saw its first major shift. Under the new leadership of Mr. Steven Graber, the
organization hired a full time shadchan, Rabbi Meir Brull, and the organization became known
as The Baltimore Shadchan. Over the course of the next 4 years, this effort was met with
tremendous success and numerous engagements resulted from Rabbi Brull’s tireless work.
Rabbi Brull additionally served as an invaluable resource, guiding families through
the shidduch process, helping them to successfully research a Shidduch and establishing
a wide network of connections for the Baltimore community with nationwide shidduch askanim.

At this time, however, it was realized that having a single shadchan, even one as talented as
Rabbi Brull, could not support the needs of such a large community. To that end, the
organization saw its next major change. Teaming up with NASI (North American Shidduch
Initiative), and a number of volunteers known as The Meet the Shadchan Group, a number of
community wide events and initiatives were instituted in order to assist the many singles of our
community. Boruch Hashem, these efforts were met with hatzlacha, and a great number of dates
were generated, with a number of engagements resulting.

After much consideration, in the summer of 2015, it was decided that yet more needed to be
done and efforts had to be further expanded. Under the guidance of its Rabbinic Board and the
experience of its newly expanded Executive and General Boards, The Shidduch Center of
Baltimore was formed, a revitalization of the original Kol Simcha/Baltimore Shadchan
organization.

The Shidduch Center of Baltimore is determinedly working to meet its mission to help create
and facilitate dating opportunities for Baltimore’s singles. Through its numerous and
expansive programs and initiatives (hyperlink to list of services page), the organization has
begun to see significant and impactful growth on top of its successful efforts of the past.
It is our hope to continue working, indefatigably, in order to assist Baltimore’s singles and those
working in shidduch parsha related fields.

About the Executive Director 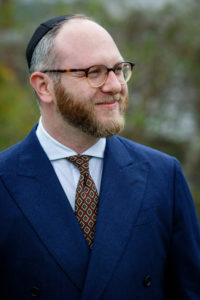 Upon completing 4 years of High School learning in Ner Yisroel, Shlomo subsequently learned in The Talmudical Yeshiva of Philadelphia, studying under, and creating close relationships with, both HaRav Shmuel Kamenetsky and HaRav Shalom Kamenetsky. Shlomo finished up his beis medrash learning in The Mirer Yeshiva in Eretz Yisroel, learning under HaRav Rafoel Shmulevitz zt”l.

After that time, Shlomo returned to Baltimore to get married and to learn in the Ner Yisroel Kollel, primarily in the yoreh deah chaburah of Rabbi Yaakov Horowitz, Rav of Kehillas Darchei Tzedek. Shlomo has completed 2 of the 3 necessary bechinas for s’micha and is presently working on his final bechina. He completed his Masters Degree in Social Work at The University of Maryland in 2020.

Throughout his adult years, Shlomo continues to act as an assistant to his father in Congregation Tiferes Yisroel, giving shiurim and drashas, organizing shul events, and working on shul events and fundraisers.

The Shidduch Center of Baltimore brought Shlomo on board in the fall of 2015, and he has been guiding the organization, with the support of its Rabbinic, Executive and General Boards, since that time.